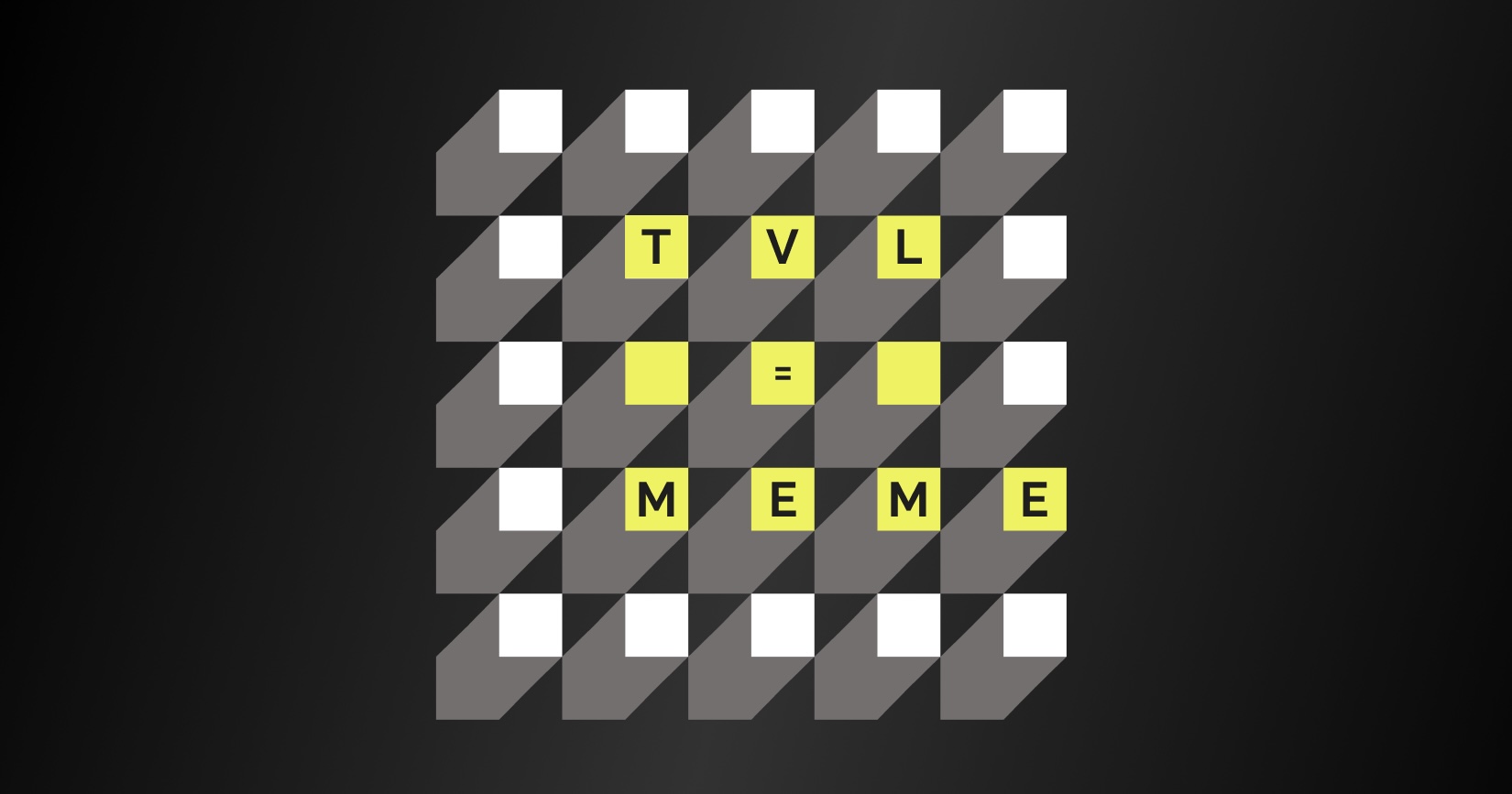 TVL is a meme

TL; DR: TVL is a meme in DeFi. It's one of the most scrutinized metrics. Obsessed over by both users and product teams, TVL is a vanity metric in decentralized finance. TVL used to be important, but not so much anymore.

In the early days of decentralized exchanges, liquidity would make or break the user experience. With small Uniswap v2 pools and other AMMs, which relied on constant market formulas, trades that needed a large portion of the pool always had high slippage. So without a high TVL, decentralized exchanges would not function well. This is how the meme of TVL started in DeFi.

Today, DEXs are going in the opposite direction. "Concentrated" liquidity exchanges are now the norm and offer a limit-order book style experience with resting prices on-chain. They allow deeper liquidity compared to spreading the same liquidity between 0 and infinity. Who could have predicted this? In the modern DEX, large amounts of liquidity remains less important than having liquidity at the right price.

TVL is a huge meme in DeFi lending. One of the first protocols to offer token incentives was Compound. By subsidizing lending and borrowing, Compound was able to amass a huge amount of assets. The catch was that many of these assets were being counted twice.

This works to everyone's advantage. Users get juicy yields and protocols get to boast that they have 100s of millions or billions in TVL. But, what is really behind these numbers other than smoke and mirrors?

TVL is a meme in liquidity pools. Lido and stETH boasted some of the deepest pools in DeFi. Until they didn’t. Many liquidity providers are mercenary, and when rewards dry up, so does the liquidity of these players. Shock events only add to the panic for an exit and sharp drops in TVL. See outflows from the stETH/ETH Curve pool as contagion hit from UST depegging. TVL subsequently dropped 50% in a month.

TVL is a meme in overall. This is clear from the statistics on your favorite dashboard. DeFi TVL is down across the board, but this whole time DeFi has been counting our computer coins in dollar terms. Some of these valuations have been reevaluated in the recent market downturn. If most of the "value locked" in DeFi was coins like ETH and ERC-20 alts and these tokens have depreciated 50-90% from their ATH, then of course the TVL numbers in fiat terms are also going to be down substantially.

So, why did we ever pay attention to this metric in first place?

TVL used to be more important. As mentioned earlier, some of the earliest DeFi primitives relied on high liquidity in order to function optimally. Simple AMMs need high TVL or they struggle with large trades. By attracting large amounts of liquidity, protocols could cater to whales and big money traders. Without a high TVL protocols wouldn't even make it on the radar. Popularity, flawed or not, was an indicator of protocol strength and acceptance in the DeFi space.

But, TVL is much less important now. Today, DeFi protocols are much more capital efficient than they were in the early days. Integral, for example, exhibits high capital efficiency by allowing trades at the 30-minute TWAP, using the entire liquidity available in a pool. Other protocols are now taking similar approaches. Whether in examples like Notional's nTokens or Uniswap v3's concentrated liquidity, capital efficiency is becoming a major selling point.

Projects are becoming more precise when calculating how much liquidity they need. JPEG'd has stirred some controversy by eschewing the traditional logic of Curve pools and opting for a small pool with a low A factor. By using treasury CVX and veCRV bribes to direct CRV emissions to the pool, the APR remains super high. Meanwhile, the supply of $pUSD is artificially constrained because it can only be minted with specific blue chip NFTs like CryptoPunks.

If i understand $JPEG correctly:$pUSD above $1 + high apr
In this economy?
NFToddlers rush to mint pUSD and farm

Approaches like this take the TVL meme and flip it on its head. For example, the new stETH/ETH pool on Integral SIZE can execute massive trades with no slippage at the 30-minute TWAP.

TVL will likely persist as a meme metric in DeFi since it's an easy one to grow and promote. However, the examples mentioned above show that smart actors are pivoting from TVL as the main indicator of success in DeFi protocols. As DeFi expands to fill even more niches in finance, we can't expect all projects to have billions of dollars sitting in their contracts. Instead, projects that are capital efficient and make smart choices with protocol design will remain useful to the market and able to leverage whatever amount of TVL they have to succeed.