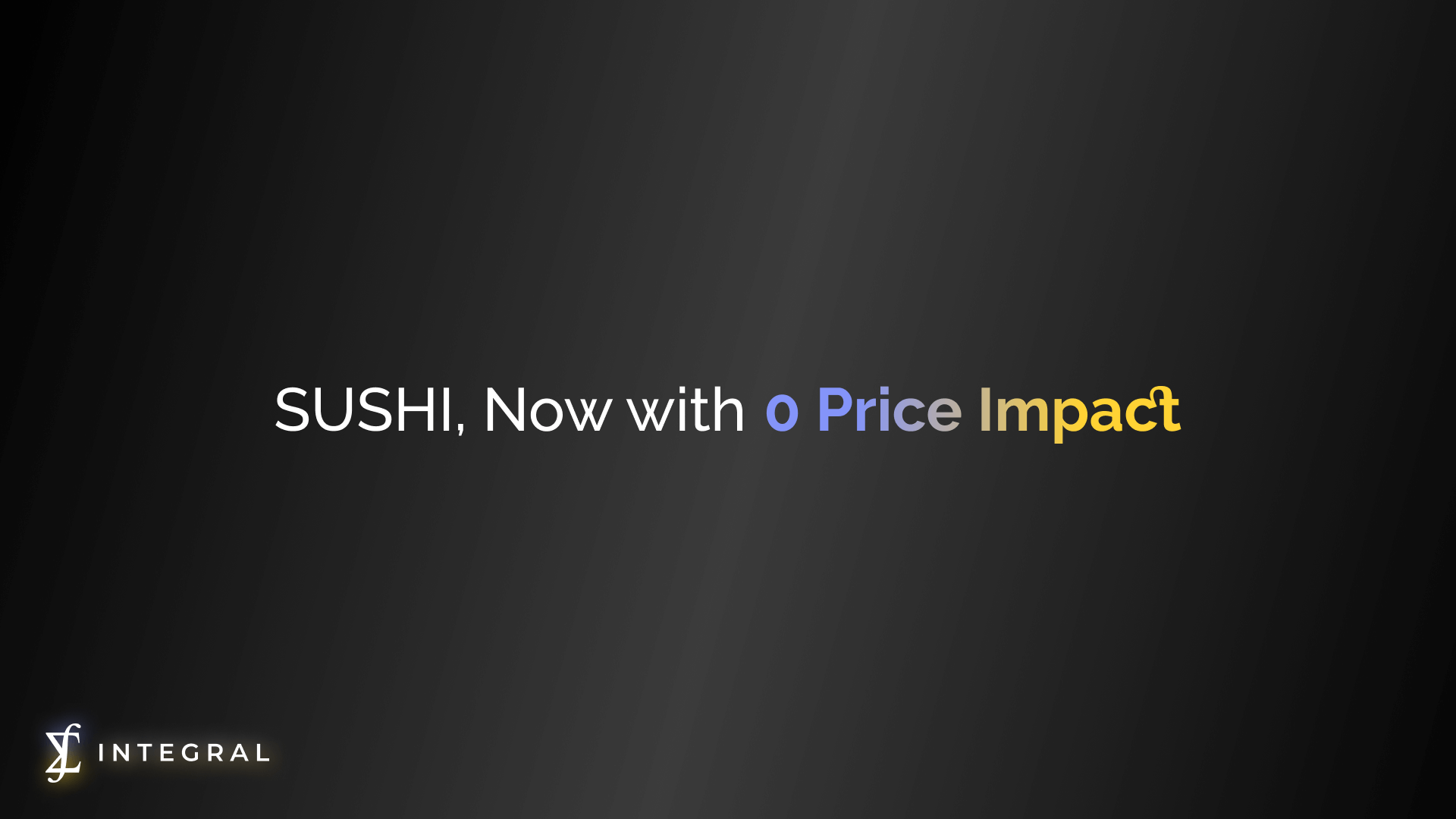 Sushi: Destiny and Drama in DeFi

Why it matters: The next trading pair to go live on Integral SIZE will be the SUSHI-WETH pair. We're excited to continue expanding the pairs where traders can swap large amounts of coins with zero price impact at the 30-minute TWAP.

Unless you're new to DeFi or have been living under an EtherRock, you've heard about Sushi. Of course, we are not talking about the Japanese delicacy, but the decentralized exchange Sushi, an OG of DeFi. In this article, we will go over a brief history of the protocol and some of the exciting things that are on the horizon for Sushi.

Sushi swap is a decentralized exchange and started as a fork of the popular exchange Uniswap v2. While Sushi took most of their code for swaps from the Uniswap codebase, the Sushi team introduced an important addition that would catapult the protocol to fame.

The change that Sushi made was to use $SUSHI protocol tokens to incentive liquidity providers (LPs) to deposit into liquidity pools. Liquidity providers can stake their LP tokens in Sushi's Master Chef contract and get $SUSHI rewards. By paying out tokens as a reward for liquidity, Sushi added a huge incentive for LPs to move their money from Uniswap to the new Sushi pools. The result was that almost 50% of Uniswap's TVL at the time moved over to Sushi and the vampire attack was born.

The Sushi team didn't stop innovating after the successful vampire attack. Another important innovation in DeFi exchanges was Sushi's introduction of xSushi. In effect, users can stake their $SUSHI tokens with the protocol and receive $xSUSHI in return. $xSUSHI holders get a prorated cut of all fees from the Sushi exchange, paid out in Sushi. This means holding $xSUSHI gives you a larger amount of Sushi over time, aligning the interests of the protocol and token holders.

While Sushi started with simple token swaps, the product offerings have grown from those early beginnings. Sushi has experimented with several products and currently have a suite of DeFi offerings. The original MasterChef has rebranded as the Onsen menu. Miso is a new token launch platform. Kashi offers lending and borrowing to allow leveraged trading. Trident offers concentrated liquidity positions similar to Uniswap v3. All of these build a comprehensive trading platform for whales and degen shrimps alike.

Despite the products that pushed the boundaries of innovation and decorum in DeFi, Sushi had its share of struggles. The roots as a fork and its quick growth made Sushi a victim of its success. There was the early drama with Chef Nomi, but it didn't stop there. As Sushi grew, so did the DAO's drama. Sushi's long-time figurehead 0xMaki stepped down from the leadership. The CTO left publicly among staff and compensation issues. In the aftermath, the organization seemed to lack the direction and purpose that had driven its early days.

An exciting proposal from Wonderland and Frog Nation looked like it could add a spark back to Sushi. That is until it exploded into more drama with the revelation that 0xSifu, Wonderland's treasurer and a key member of the team, was Michael Patryn and connected to a long history of questionable activity. The Wonderland proposal fell through and Sushi has since fallen out of the spotlight.

While the crypto-twitter pundits have moved on to new drama, the Sushi team put their heads down to do the important work of planning the protocol's future. The first public detail of this plan has come to light in the recent proposal posted to the Sushi governance forums. The full roadmap for Sushi 2.0 is a long document that details the planned changes for Sushi's suite of products and new products like the Shoyu NFT marketplace.

While the product changes will be welcome news for Sushi's fans, even more exciting will be the renewed sense of direction from the team. While a number of proposals from outside the organization have attempted to bring reform to Sushi, the most recent Sushi 2.0 proposal seems to have the backing of the community and the team's leadership. We are excited to see what comes next from what has always been one of DeFi's most exciting protocols.

What to do with your $SUSHI?